Battle of the Legends October 1991, Jeff Smith the Executive Director of the American Historic Racing Motorcycle Association met with BMW representatives to plan a sponsorship package for the upcoming vintage motorcycle racing season. What started out that day as an idea over lunch became a major motorcycle race series known as “The BMW Battle of the Legends.” The concept: motorcycle legends of days-gone-by racing identically prepared BMW motorcycles at the AHRMA vintage races at Daytona Beach, Florida and later at Loudon, NH; Sears Point, CA and Lexington, OH. In March of 1992 the first event was held at Daytona International Speedway. It featured 10 motorcycle celebrities and drew a crowd of 16,000 racing fans. Eight additional BMW Battle of the Legends events have been held in front of a collective audience of more than 200,000. There were a total of 23 Legends involved in the races called the Battle of the Legends. 9 races were held over the years 1992 through 1996 Legend - Walter Zeller Walter Zeller was a former Grand Prix motorcycle road racer from Germany. Zeller rode for the BMW Factory beginning in 1951 and became the lead rider for the BMW factory racing team in 1954. Walter Zeller’s career includes earning a gold medal during the 1951 International Six Days Trial (now known as the International Six Days Enduro), three German national championships, plus a memorable ride in the Senior TT at the Isle of Man in 1956. When asked to join the BMW Battle of the Legends for the second race in 1993, he did so graciously and without fanfare. That was his style. At age 65 years old- he competed in the race and had a wonderful time! Walter Zeller passed away in 1995. This is the BMW R100R Model used in BMW Battle of the Legends events in 1993. The identical new race prepped BMW R100R “Boxers” sport the new Battle of the Legends graphics on pearl white paint. There were only 17 of these bikes setup for Daytona 1993 the Battle of the Legends race. Fifteen were raced by “Motorcycle Legends” and two were backups. This bike is # 15, serial number 0280581 RARE!!! 1993 R100R Battle of the legends BMW Factory race bike Pearl white, 29,288 miles. All original as factory prepared, signed by the legendary BMW Factory Motorcycle Racer Walter Zeller! The bike has never been down. This was BMW’s “back up” bike for the Battle of the Legends race held in Daytona in 1993, and was ridden in the later 1993 race by Walter Zeller. Re-Psycle BMW, Parts has just performed a Factory Major Service (10K) on this bike. This bike has been made useable on the street with the addition of turn signals, center stand and side stand. $11,500.00 OBO 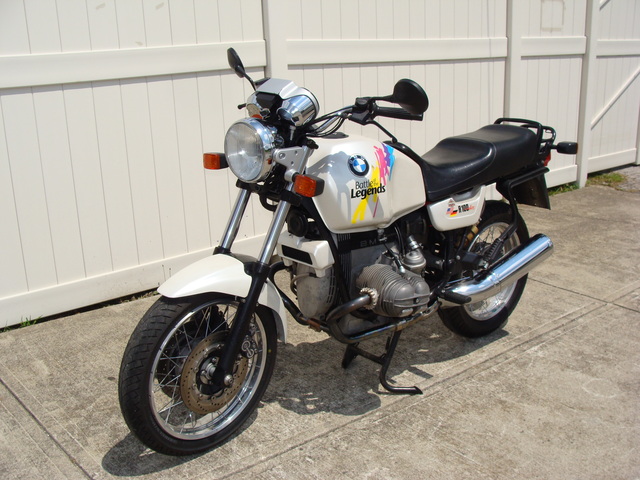