This is a 1981 R100RT converted to an “S”. We have done all the work on this Bike for at least 20 years. The previous owner (who we sold it to) had us install the 336 Sport Cam while he had it. He also had the tank, fender and seat cowl professionally repainted. However, for some reason he did not have the fairing or battery covers painted. He ended up not riding it enough and eventually sold it back to us. One of our employees bought it and rode it for a couple years while he was working on his other bike. Some time later there was a transmission failure and the bike was parked. When it was finally time for a resurrection, we decided it was time for a complete service mechanically and cosmetically. We started with a complete transmission rebuild with all new bearings along with a metal roll pin upgrade for the shifter cam. In this transmission, we had already done the circlip and shift-kit upgrade to it some years back. The top end was completely re-sealed, along with the heads de-carboned and valves lapped in. A new rear main seal and oil pan gasket was installed. The carburetors were rebuilt with new floats and needles and new rubber grommets for the carb to head. New throttle cables and choke cables were added when the “S” bars were installed. The forks were rebuilt with all new seals along with new paint for the fork legs. Brake lines were upgraded to new braided stainless and new front and rear pads were installed. EBC floating brake rotors were added to the bike some years back. Although the tank, fender and seat cowl looked very good yet; the RT fairing and battery covers were extremely faded. The decision was made to convert the bike to an “S”! We started with the handle bars and cables. We decided to go with a BoxerCafe S fairing since it is not an original S anyway. Besides, we were anxious to see how nice they were. Instead of going with traditional mounts, we decided to go with solid mounting the fairing to the frame instead of the forks. We started with a RT fairing mount and modified it and then used modified K fairing mounts as brackets, keeping it nearly all OEM! With the fairing being frame mounted, this makes the bike more stable at speed. We then matched the Smoke Red paintjob, refinishing the fairing; battery covers; rear fender along with an added oil cooler cover. Right now it has a very rare (and durable) Krauser windshield, but a regular or smoke shield can be installed if that is preferred. This bike is fun, quick, handles very well and looks good doing it! It can be a fun weekender bike or daily commuter. Luggage can easily be added for touring. 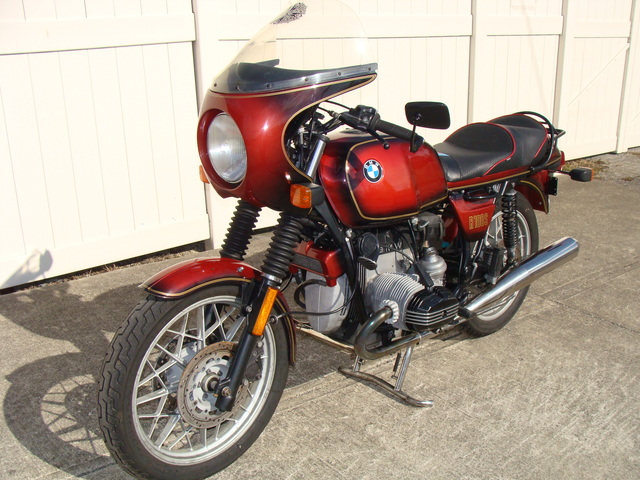