This vintage BMW has been extensively serviced, and many items rebuilt. We tore down and inspected the top end and found it to be in good condition with piston clearance well within factory specifications. We de-carboned the head, and lapped the valves. The valve guides are in good condition. The rod bearing clearance on the crankshaft was checked and also found to be well with specification. The top end was re-assembled and resealed. The cam chain was replaced and new front engine seals installed. We replaced the engine rear main seal, inspected the oil pump and installed a new cover o’ring. Next we cleaned and rebuilt the carburetors. We tore down, cleaned and inspected and rebuilt the front fork. New 13 rib fork “Gators” were installed. The steering neck bearings were also replaced. Both wheels got new bearings and seals and the rusty chrome spokes were replaced, the aluminum rims were polished, and the wheels trued. A new drive shaft boot was installed. We tore down the transmission and inspected it carefully. We replaced the input shaft cushion drive spring, and resealed the transmission. The clutch was inspected, and the friction disc was replaced. The final drive was also torn down, inspected, and resealed. The paint is in good condition, but not perfect; there are several nicks and scratches, but it is bright and shiny and very striking from a short distance away. There is a small dent on the upper right rear of the tank, just above the chrome tank cover, and the pin stripes are worn at the rear of the tank on both sides. The original /5 exhaust is in good condition, and the mufflers are shinny. The seat and grab rail are in good condition, with new rear trim on the seat. The instrument set was repaired and reconditioned. New original Continental cloth braided fuel line was installed. The wiring was repaired in several places. A new rear Metzeller tire was mounted and balanced. New original style round front foot peg rubbers and hand grips were installed. New throttle, clutch, and brake cable boots were installed. A full 10 K Major service was performed to make the bike ready to go for the Spring. We have started putting some test ride miles on it as weather permits (300 Miles so far), and will continue working on the little details that still need to be addressed. 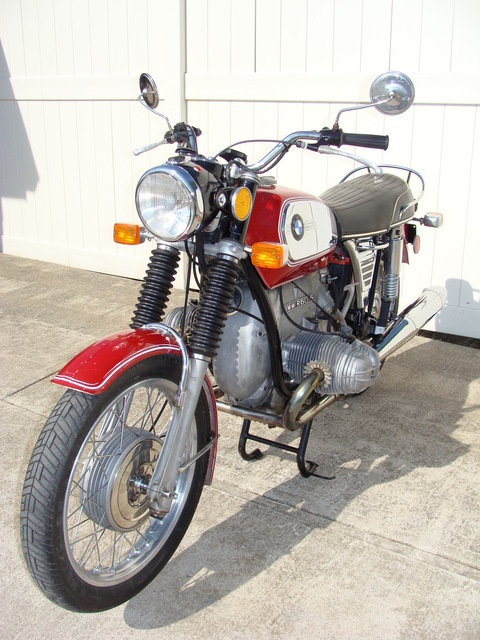