#644760 1969 R50/2 Complete, original, VGC, Fairing, Bags, Solo seat. Only 13,900 miles. It was owned by a “Motor Maid” who rode it to their conventions in the 70’s, 80’s, and 90’s. Until last month it had been sitting garaged for the last 4 years. We put a new coil in it to make it start easily again, but that is all we’ve done. It starts easily, and runs well. We plan to install a new battery before we sell the bike. This bike is in much better cosmetic and mechanical condition than would normally be expected of a bike of this age. It has obviously been well cared for throughout its life. Engine, frame, and title numbers match. It has a Heinrich handlebar fairing, chrome Handlebar Set-backs, Bar-end Turn Signals, Loop type chrome engine guard, Solo Seat (white naugahyde with fringe at the rear), a BMW Rack on the rear fender, Schweringen Mufflers, and white Buco saddlebags. The paint on the body is in good to very good condition, bright and shinny, with several minor normal scratches and chips, mostly on the frame. The pin stripes on the bike are in very good condition, except on the fairing. The Metzeller OE style tires are in Very Good condition. 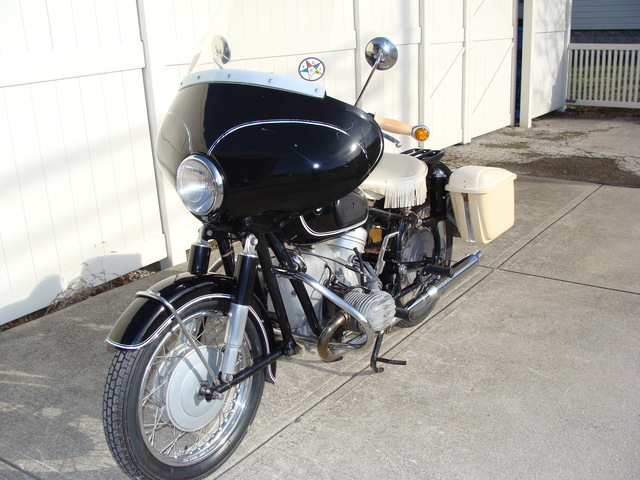