This Vintage 1976 BMW R90/6 has the much sought after larger 22 Liter fuel tank. This rapidly appreciating Vintage BMW model was only made for 3 years (1974-1976), and they are beginning to get hard to find. The engine and frame numbers match. This bike has just had a Major Service (10K). New plugs and air filter were installed, and all oil, gear lube, and brake fluids were changed. The fuel tank and carburetors were cleaned. New original braded cloth covered fuel line was installed. The instruments were cleaned and serviced. New fork boots were installed. The forks were disassembled and inspected, and reassembled with fresh fork oil. The neck bearings were inspected and serviced. The front brake master cylinder was rebuilt. The rear wheel has new wheel bearings. The seat was recovered with an OEM Reproduction cover, and OEM trim. The battery is a new sealed Westco. The bike has new Kenda Challanger tires, front and back. The BMW chrome mufflers are in very good condition, the header crossover has been painted black. All electrics work properly, the handlebar switches are in good condition, and have positive detents. The bike starts easily and runs smoothly. The transmission shifts normally. The bike was repainted within the last couple of years; it looks good, but there is no pinstripe on the rear fender. There is a tool tray, but no tool kit. There are 2 keys for the ignition switch, but none for the fork and seat locks. The flaws: A very small paint chip in top right rear area of tank, and an extremely tiny ding several inches to the left of the paint chip (can only be seen from side angle). Several paint chips and scratches in rear half of the front fender. 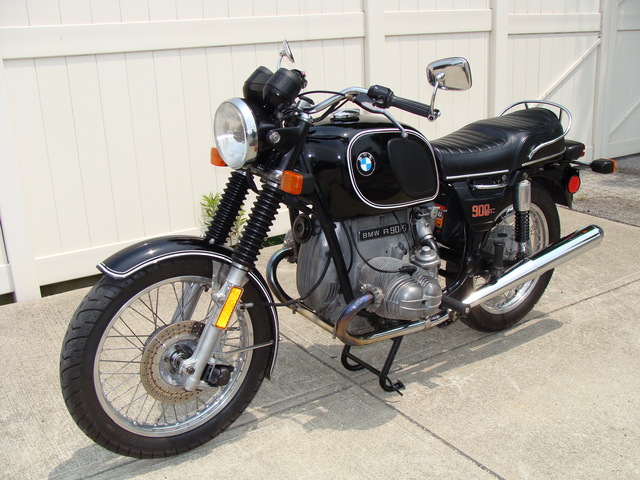