1981 BMW R100T, Blue Smoke paint. Rabid Transit fairing and lowers with Clock, volt, &Temperature Gauges in dash. Wide Clubman bars, BMW Engine Guards, Krauser Saddlebags on BMW Black one piece Rack with Bag Mounts, Brembo Dual Front Discs Brakes with new Brake Pads, Koni rear shocks, Metzeller Tires on BMW Snowflake wheels, Reynolds Ride-Off centerstand, Brown sidestand. Tool Kit and Owner’s Manual. The mufflers are new. The custom Blue Smoke on silver paint job is in very good condition; the only defect is some light scratches on the right edge of the upper. The Rabid Transit fairing is a very high quality fiberglass aftermarket fairing made by Don Vesco, of Bonneville Land Speed Record fame. It was wind tunnel designed and manufactured from the mid-nineteen seventies to the mid-nineteen eighties. It is an ideal in between sport touring fairing; a bit larger and considerably more comfortable to ride behind than a BMW RS fairing, but smaller and with considerably less wind drag than the big BMW RT fairing. First we went over the bike front to back and performed a BMW Factory Major (10K) Service. New wheel bearings were installed and shimmed on both wheels. A new Metzeller tire was installed and balanced on the front wheel. New Steering neck bearings were installed. The Carburetors were rebuilt. We rebuilt the front handlebar Master Cylinder and installed new brained stainless covered brake lines. After test riding the bike, we found occasional missed downshifts from 5 to 4 and 4 to 3 under hard deceleration. We pulled the transmission and opened it up and found only some worn bearings. All the gears, forks, etc. were in excellent condition. We went ahead and rebuilt the transmission and installed all new seals. While we had the transmission out, we went ahead and cleaned and inspected the clutch (very good condition), installed a new rear main seal and flywheel and oil pump o’rings, and lubed the clutch splines. The bike starts easily, warms up easily, runs smoothly, and VERY strong! The missed downshift problem has been fully cured. During our final, extended (200 Miles) test ride, we compared how this bike runs with a 1979 BMW R100RT which has had a BMW Factory 336 degree Sport cam installed. After riding both bike sequentially, we believe that this 1981 R100T may also have the factory sport cam installed. When we have time, we’ll have to get the degree wheel and dial gauge out to determine that for sure. The chrome exhaust system is solid, but has surface rust inside the bend of the headers. There is a crack in the windshield, but it has been stopped with a hole drilled at the end. We have another un-cracked windshield, but it is taller and less aerodynamic than this original Rabid Transit windshield. We will install either shield, your choice. 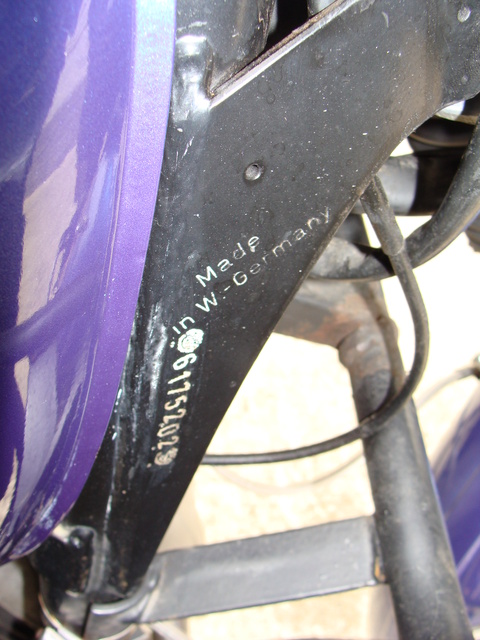