2976369 1971 BMW R75/5 SWB, Black. Only 13,000 original miles. Cosmetic Restoration, deep Service, new Battery, Tires, Mufflers. Much more! This beautiful 1975 R75/5 has very low miles! It has just had a cosmetic restoration and deep service. The Cosmetic restoration was started by one owner, continued by the next owner, and finally finished by us. It has had the frame, subframe, swingarm, centerstand, headlight mount ears, headlight bucket, and front turn signal mounts powdercoated in gloss black. The Tank and front fender have been repainted and hand pinstripped as original. We took over the project when the previous owner was stumped with properly replacing the electrical connections necessary after having the headlight bucket powdercoated, and by the jetting / carburetor problems caused by dirty carburetors and the attempt to install a 2 into 1 header instead of replacing the exhaust system with a new original style system. We installed a new ignition switch, and replaced the cracked circuit board with a good used one, and straightened out the rewiring errors made by the previous owner. While we were there we retrofitted fuse holders because BMW did not have them that year. We also took off the 2 into 1 header and installed nice used OEM headers and new OEM replica /5 “cigar tip” style mufflers. The previous owner had installed a 5 speed transmission instead of fixing the rumbling bearings on the stock 4 speed. We picked out a nice low mileage used 4 speed transmission, opened it up and inspected and resealed it, and reinstalled it in the bike. While we were there, we removed the clutch and cleaned up the friction disc, and replaced the outer pressure plate with a resurfaced one. The inner pressure plate and spring were both in very good condition, so we reused them. The clutch splines were also lubed at that point. The previous owner recovered the seat with a new stock style cover with passenger grab strap, and he painted the seat pan. He chose to not re-use the stock aluminum trim, and we chose to leave it like that. He also somehow got 1972-73 style headlight mounts with the large 80mm reflector and the later style license plate bracket (also with the large reflectors) when he had the Powdercoating done. We chose to also leave those items like that. We resealed the left cylinder as the pushrod tube seals were leaking; the right is in good condition. We also installed a new gasket to reseal the oil pan. We installed a new improved reed style engine crankcase breather valve. We installed the BMW Factory recommended Ground Upgrade Harness for better charging and ignition. We cleaned and re-jetted the carburetors back to stock. New Tires were installed, New Battery, New original Continental braided cloth covered fuel lines, 2 new BMW Mirrors, New Grips, New Footpeg Rubbers, and other new small rubber pieces. There is a nice OE Tool Tray with a new rubber seal, and an Original BMW Factory Tool Kit. The flaws: Before Powdercoating, the previous owner failed to have the metal perfect on 2 items, the headlight bucket and the right headlight mount. There are shallow imperfections on both items, not immediately noticeable until the light hits it just right. Also there is a small ding on the chrome headlight ring. You can see those imperfections in the last 5 high resolution photos on Picturepush.com (see access instructions below). Finally, there are not any keys for the steering neck and seat locks. Additional cosmetic detail work was done to bring the bike up to an attractive whole. We finished with an end-to-end 10K Service and a 1000 mile test ride to be sure everything was PERFECT (alright, it was just so nice that we just wanted to ride it for a while!). 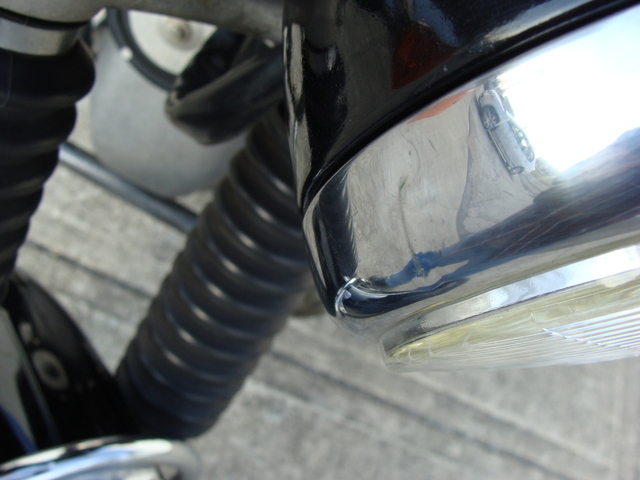